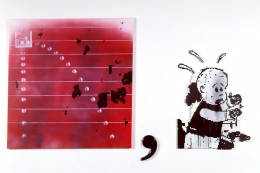 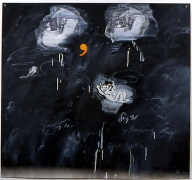 The Mark Moore Gallery invites you to join us for an exhibition of new work by artist VERNON FISHER, opening to the public on April 6th with a reception for the artist from 5-7pm.

Vernon Fisher (born 1943), one of Texas's most acclaimed artists, fills his work with an intelligence and wit that engage the viewer in his unique artistic language. For more than 30 years, Fisher has challenged viewers to find hidden as well as blatant meanings in his work, and he does so by using seemingly disjunctive elements and juxtaposing the glorious with the prosaic. The core of his work is about the process of interpretation. Ironically, his works ultimately resist resolution.

In a file marked '00' and in other archives, Fisher accumulates source material that consists of photographs from magazines or newspapers; maps, charts, and diagrams torn from scientific texts; and photographs he takes himself, ranging from images of the sublime landscape to those of the mundane environment -- the ubiquitous Dairy Queen sign, a recreational vehicle, and concrete figures on a miniature golf course. File 00 is the origin of Fisher's creative process.

Philosophically playful, Fisher tells his stories through synthesizing various media: painting, drawing, photography, found and fabricated objects, and text. Of the stories Fisher weaves and the images he accumulates, he shuffles and arranges them into different combinations until the perfect match between text and pictures is achieved. These stories come from daily experiences, observations, and musings that he jots down in a notebook. '. . . consciousness is a very small part of our interaction with the world, it is a metaphor for our finding our way,' he stated. 'I see myself more an observer than anything else. I just see all this stuff and point to it.'

In his first show in Los Angeles in four years, Fisher draws on everything in his archives - both in terms of imagery, and techinique - and crafts an exhibition of new work that is a tour de force of his skills as an artist and draftsman, as well as elevates the work to a new level. These new “paintings” combine his interest in sculpture, painting, and drawing combined. Working in a variety of media, Fisher is widely recognized for his blackboard paintings which often combine the elements of image, text and maps. As a conceptual artist, Vernon Fisher seeks to analyze and redefine images and ideas by using analogical systems in these works which are ultimately subverted by the viewer's imagination. With the mixture of these ingredients, a story – whether it be factual or fictitious – begins to unfold. The elements in these new paintings which may be looked at as separate “stories” in themselves or, when combined, one large story in which the beginning and end cannot be deciphered.

FISHER was included in the 2000 Biennial at the Whitney Museum of American Art, New York and was the subject of a one-person exhibition at The Glassell School of Art of the Museum of Fine Arts, Houston. FISHER is included in major public collections including the Museum of Modern Art, New York; the Solomon R. Guggenheim Museum, New York; the Art Institute of Chicago; the Hirshhorn Museum and Sculpture Garden, Washington, DC; the San Francisco Museum of Modern Art; and the Los Angeles County Museum of Art.