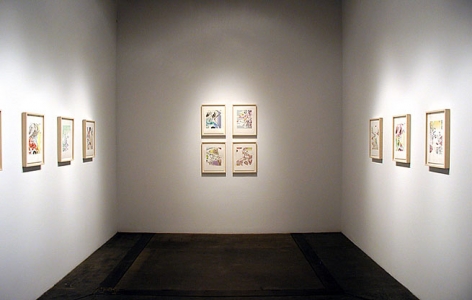 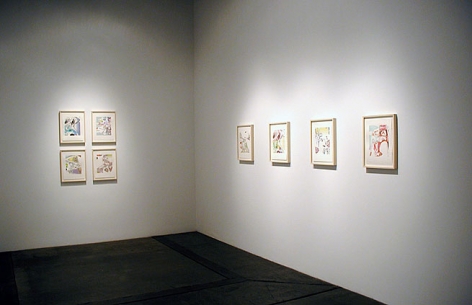 Mark Moore Gallery is pleased to announce the first West Coast exhibition of works on paper on by Shirley Kaneda. First identified with the post-formalism that emerged in the late 80's, Kaneda has resisted stylistic consistency by continually revising and expanding her artistic approach. Her familiar vocabulary of biomorphic or linear shapes and patterns often seem to congregate and disassemble across vast white or brightly-colored, space less fields. However, by confronting issues of reproduction, repetition and variation, Kaneda literally turns her lexicon on its head and raises questions about how changes of syntax or orientation affect the viewer's understanding of her artworks and their relationships to one another.

Recently, Kaneda has incorporated digital technology into her work through her use of photography, scanning, digital manipulation and printing. Lilly Wei of ARTnews has written of the work, “While retaining their sleek sophistication and their collage like camouflage...Kaneda’s brand of Pop-Op-abstract-surreal continues to riff on modernist formulations, on gestural-geometric give and take, accompanied by lots of white to allow for elbow room.”

Shirley Kaneda was born and raised in Japan and moved to New York in 1970 to study art. She was a recipient of the 1999 John Simon Guggenheim Memorial Foundation Award and has exhibited widely in the US as well as in Europe. Since the early 1990's, Kaneda has been active in the discussion, promotion and definition of late 20th century painting through numerous published articles on abstraction, interviews with artists and the curation of several important exhibitions. Shirley Kaneda was selected by Raphael Rubenstein as one of the top young emerging artists to watch in his recent feature article in Art In America, “ 8 Painters: New Work” (Art in America, November 2003, p. 130-3). Shirley attended the Claremont Graduate University (Claremont, CA) and is currently lives and works in New York City.