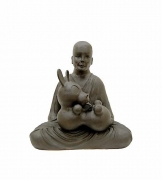 Mark Moore Gallery is pleased to announce the inaugural exhibition of work by Nobuhito Nishigawara. In an era of globalization, as cultural identities and the boundaries between them become less rigid, Nishigawara's ceramic sculptures embody these cultural intersections. Born in Nagoya, Japan but having lived across the States, from Missouri to California, Nishigawara takes this global phenomenon and transforms it into a personal investigation of the inner-self. His repeated use of a stylized donkey figure is reminiscent of the industrialized kawaii aesthetic that prevails in Japanese culture, yet his use of ceramic renders it a sophisticated contemporary talisman. When paired with Nishigawara's other characters, that reference everything from ancient warriors to Renaissance dress to Disney cartoons, the donkey figure speaks of attempted relationships, of cultural confusion and dislocation. Nishigawara's sculptures seem to belong to every time and no time, to every place and no place. Rather than presenting concrete observations, they propose open-ended questions, their very uncertainty both liberating and disconcerting, their aesthetic belonging to us all and to no one in particular.

My inspiration comes from the culture I live in. Living in a melting pot of imported cultures and stimulants, my perception of aesthetic and self has become uncertain.
Nobuhito Nishigawara

Nobuhito Nishigawara received his BFA from the Kansas City Art Institute (Kansas City, MO) and his MFA from Arizona State University (Phoenix, AZ). He has exhibited his work widely throughout the United States in both group and solo exhibitions. Identities will be his first exhibition at the Mark Moore Gallery. Nishigawara lives and works in Santa Ana, CA.