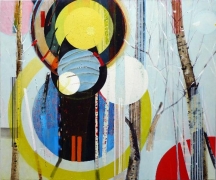 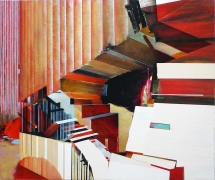 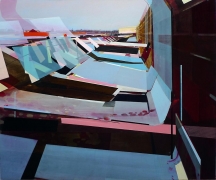 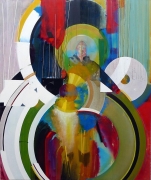 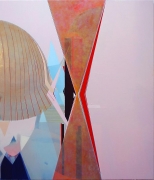 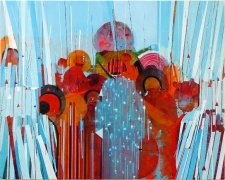 Mark Moore Gallery proudly presents "ЗЕРКАЛО (Mirror)," an exhibition of new works by Russian painter, Dimitri Kozyrev. Marking the artist's second solo show with the gallery, "ЗЕРКАЛО" encompasses the artist's signature visual and conceptual dichotomies, with a compelling development in figuration. Kozyrev drew inspiration from Russian director Andrei Tarkovsky’s film, Zerkalo, from which the title for this show was derived. Through a series of bold paintings, Kozyrev explores the polarities and intersections of his divergent selfhood with equally varied techniques, allusions, and palettes in much the same way that Tarkovsky juxtaposed similar elements to move between the past and present.

At once gestural and structured, organic and geometric, expressive and composed, Kozyrev's painterly multiplicity bespeaks a personal hybridity. Once a Soviet Air Force soldier and now an American university professor, Kozyrev evokes a sense of duality with his manifold imagery - an optical migration that parallels his own. Fractured terrains summon both war-torn landscapes and elegant Bauhaus architecture, an unlikely synthesis that sets Kozyrev's two-dimensional forms into illusory movement. Geometric elements of Russian suprematism and constructivism coalesce with the gesticulation of abstract expressionism, forging a topography that is as nostalgic as it is uncharted. Kozyrev's manipulation of depth and shape produces shifting planes and ruptured formations that splinter and contort in a projected physical and mental space, an angular contouring that the artist likens to "scars." Much like their bodily counterparts, these conceptual lesions mend the visual and social chasms that are often considered autonomous – forging a seamless union analogous to the artist's composite experiences.

Dimitri Kozyrev (born 1967, St. Petersburg, Russia) received his MFA from the University of California, Santa Barbara (CA), and has since had solo exhibitions in New York, Santa Fe, Los Angeles, and Chicago. His work has been exhibited at Krasnoyarsk VIII Biennale, Museum of Contemporary Art, Russia, the Tucson Museum of Art (AZ), MOCA (AZ), Gulf Coast Museum of Art (FL), Santa Monica Museum of Art (CA) and the Armory Show (NY), as well as an exhibition organized by the Torrance Art Museum (CA). Kozyrev's work has been acquired by the Berkus Family Collection (CA), Wellington Collection (MA), UCSB Art Museum (CA), and he is the recipient of the Abrams Prize (CA) and Art Omi Residency (NY). The artist lives and works in Tucson, AZ.