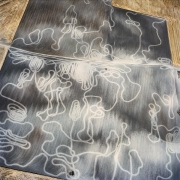 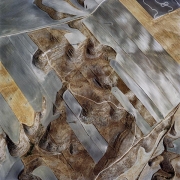 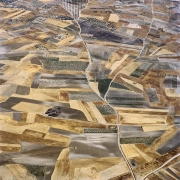 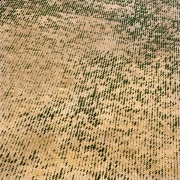 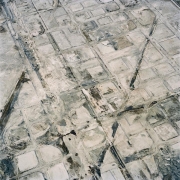 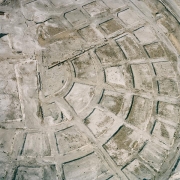 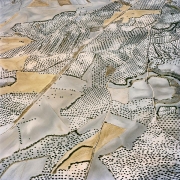 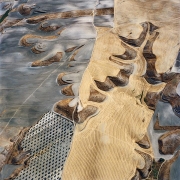 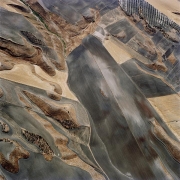 Mark Moore Gallery is proud to present "The Fall," a recent series of large-scale color photographs by California–based artist David Maisel. For over two decades, Maisel has rigorously photographed aerial perspectives of landscapes affected by industry, agriculture, urban sprawl and other forms of human intervention. Despite the political underpinnings of these images, Maisel’s work refuses didactic interpretation, arriving instead at a surreal and abstracted intersection of beauty, mystery, and horror that the artist has referred to as the “apocalyptic sublime.”

Maisel was commissioned to photograph the city of Toledo, Spain, for ToledoContemporánea, an exhibition created to commemorate the 400th anniversary of the death of the painter El Greco. The Fall is Maisel’s personal response to the landscape between Toledo and Madrid, in which he reveals topographies that have been aesthetically deranged and environmentally impacted by industrial use. From abandoned construction sites in Vicalvaro, ashen extraction zones in Borox, and crosshatched fields in Fuensalida, Maisel constructs a hallucinatory and alien worldview. Speaking to this, the artist says, “The baser the terrain, the more susceptible it is to contemplation, and the more complex it becomes as subject matter; I consider my pictures not as simply documents of these blighted regions, but as poetic renderings that reflect the human psyche that made them.” Maisel’s painterly abstractions in The Fall reference a variety of sources, from the landscapes of Richard Diebenkorn to the lunar renderings of NASA.

Maisel’s work has been exhibited globally, including such institutions as the Los Angeles County Museum of Art (CA); International Center of Photography (NY); Palais de Tokyo (Paris); Fotografie Forum International (Frankfurt); American Academy (Rome); Musée des Beaux Artes (Bordeaux); and Seoul Arts Center (Seoul) among many other venues. Maisel’s works are in major public collections, including the Metropolitan Museum of Art (NY), the Getty Museum (CA), the National Gallery of Art (Washington D.C.), the Victoria and Albert Museum (London), the Los Angeles County Museum of Art (CA), and many others. He received his BA from Princeton University, studied at Harvard University Graduate School of Design, and received his MFA from California College of the Arts. Maisel is the recipient of a 2011 grant from the Center for Cultural Innovation, a 2008 Artist Residency from the Headlands Center for the Arts, and a 2007 Scholar/Artist Residency from the Getty Research Institute. He has received fellowships from the National Endowment for the Arts and the Center for Cultural Innovation. He was appointed a Trustee of the Headlands Center for the Arts in 2011. The artist lives and works in the San Francisco Bay Area.