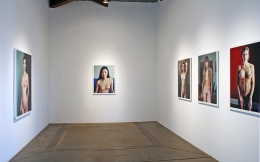 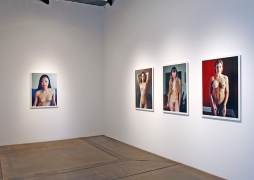 Mark Moore Gallery is pleased to present a selection of photographs by Chan Chao.

“To my eyes, Chan’s photographs present nakedness without artifice. They neither ignore fact, nor trivialize fiction. They’re honest, even blunt at times, but never unkind. They depict beauty but not idealism” comments Susan O., one of the models Chan Chao uses in his series of nudes entitled Echo. With a subject matter that the artist acknowledges as “a territory with its own ’traps,” for its role in the history of art, Chao chooses to use the subject of the nude female to move beyond what he believes are typical post-modernist discussions of portraiture concerning sensuality, eroticism and the voyeuristic male gaze. Through the lens of the camera, Chao creates an undertone of tension and discomfort for the viewer by the scale of the photographs, the direct gaze of the model, and the distance between his lens and his subject, challenging stereotypes of nude female portraiture.

Selected for the Whitney Biennial in 2002, Chan Chao’s photographs appear in numerous public collections throughout the United States, including the Whitney Museum of American Art, the Corcoran Gallery of Art and the Hirshhorn Museum in Washington DC.