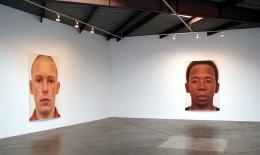 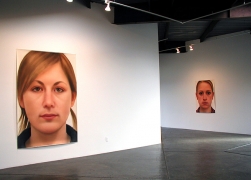 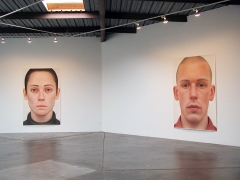 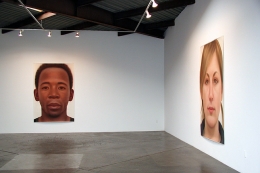 Mark Moore Gallery is pleased to present the first West Coast exhibition of Belgian artist Till Freiwald’s large-scale watercolors. Freiwald’s images further the question of contemporary identity, depicting everyday people of various ethnicities in closely-cropped head-on portraits. These works are minimal and documentary, a straightforward approach that belies their soft and beautiful effect. In Freiwald’s watercolors, our sense of the inner life of each sitter is as important as our sense of the abstract geometry of the human face–revealed by the artist in the delicate curve of a chin, the fullness of a lip, or the glint of an eye.

Freiwald’s work occupies an odd space between realism and idealism. His images get to the heart of the issues surrounding contemporary portraiture, conflating the specificity of its practice–and its goal of revealing the depicted subject–with the widespread leveling conventions of photographic representation. Photography, as it appears in magazines and other media, is disposable, as are the images of the people depicted: we see many pictures of people each day, but rarely engage ourselves with the people we see. Freiwald’s images carve out an intimate and meditative space to explore and feel the power of the human image, but at the same time, they are oddly general, even alienating. The distancing of photographic representation is mirrored in Freiwald’s own practice: the artist works primarily from memory, mediating his images of his sitters with his own fleeting memories of them.