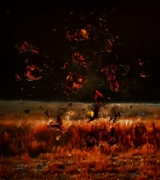 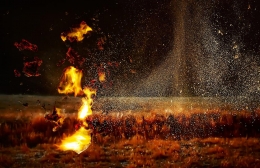 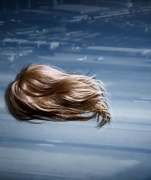 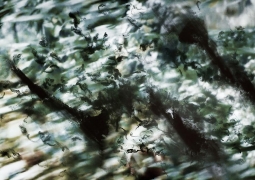 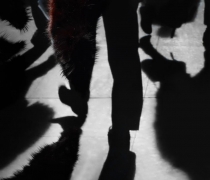 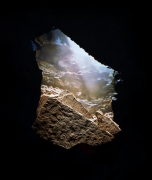 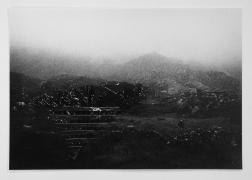 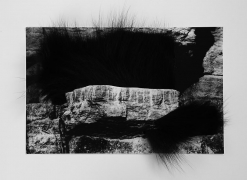 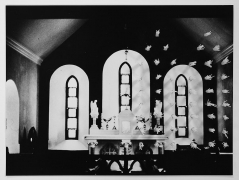 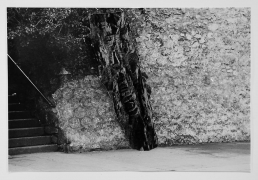 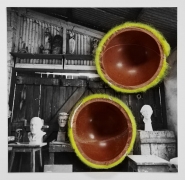 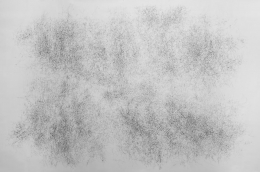 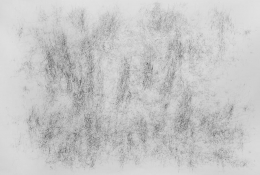 Mark Moore Gallery presents Walking Back The Cat, the second exhibition by interdisciplinary artist Stephanie Washburn, including photographs, collages and drawings. Washburn continues her exploration of the interface of material and digital surfaces as well as the persistent relevance of human touch in the construction of pictorial space.

"Telltale," a series of digital photographs, was composed by staging everyday materials against screen imagery from film, advertising, surveillance footage and the Internet. Washburn works from a screen placed on the floor like the flatbed plane of an abstract canvas and subtly, but also almost violently, alters the implications of the source imagery. The backgrounds, often eerily empty landscapes, are used to set the scene in their original context. However, Washburn diverts those narratives to her own outcomes through the use of materials such as hair, wool, bubble wrap, bottle mouths and burning embers. The resulting photographs subvert the disembodied experience of watching a screen, and ultimately return us to its surface as an unlikely point of contact and physical orientation. Teasing out tensions between constructed and straight photography, the images are clearly theatrical but also present evidence of the ambiguity of place and presence in an increasingly virtual world. Washburn also debuts a related series of collages and assemblages, "Here About." The work began in response to a group of found vintage silver gelatin prints. Washburn’s cuts, piercings and sculptural additions layer the prints with a myriad of histories beyond their own and question the authority of the photograph to capture a particular moment. As with "Telltale," her orphaned materials, ranging from fur to tennis balls, are aggressively detached from their original function and replaced by an animate, almost totemic, and at times uncanny presence. Washburn concludes with two drawings on vellum paper from her series "Walking Back the Cat," which again refer to screen imagery in a decidedly performative way. Reiterating the importance of touch, the drawings show her hand’s attempt to make sense of the spiraling catastrophe depicted in several looped sequences from the film Earthquake about the end of Los Angeles. The results, delicate but dogged, wrest an apocalyptic spectacle onto an intimate surface layered with the slower time of a real body in action.

Washburn received her MFA from the University of California, Santa Barbara. Her work has been exhibited at The University Art Museum (CA), The Palms Bar (CA), Atkinson Gallery (CA), Santa Barbara Museum of Art (CA), Eagle Rock Center for the Arts (CA), Los Angeles Municipal Gallery (CA) and Davidson Art Center (CT). Washburn's photographs have been acquired by the Museum of Contemporary Art, San Diego (CA) and Sweeney Art Gallery at the University of California, Riverside (CA). She currently lives and works between Ojai and Los Angeles.