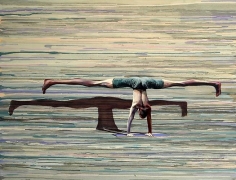 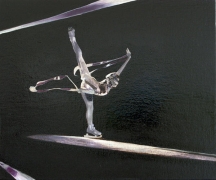 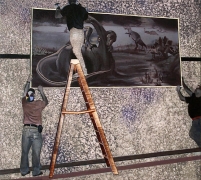 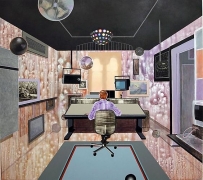 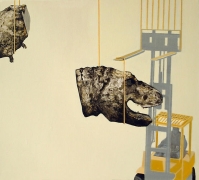 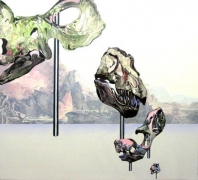 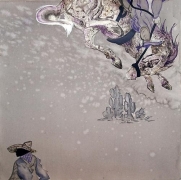 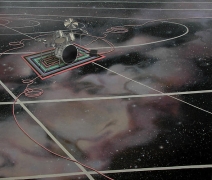 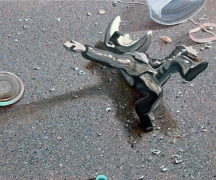 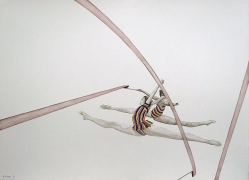 Mark Moore Gallery is pleased to present new work from British painter Simon Willems. Taking its title from the name given to New Age meditation music, Cloud Music will act to expand on earlier themes within Willems' work that pertain to the notion of, as he terms it, "contemporary vulnerability". Willems' ironic re-appropriation of the title alludes to his concern with mock existentialism, cultural indoctrination and the creation of new meanings. His subject matter largely focuses on the escapist locales and objects upon which contemporary culture fixates; yet often in states of abandonment and disrepair. The largely muted palate Willems' employs echoes his depleted subject matter, while pops of color act as a reminder of what was hoped for, or hint at what might yet be salvaged from the ruins.

Willems' combination of surreal scenes and failed utopias with somewhat absurd pop music references create witty existential clichés. The subtle humor of which creates a sense of mocking, poking fun at contemporary society and the way in which it flails to make sense of itself through any and every means within reach. While it lacks any self-awareness, as the oblivious figures he depicts testify.

Simon Willems received his BFA from Nottingham Trent University in Nottingham, UK before moving on to receive his MFA from the Royal College of Art, London, UK in 2000. His work has been exhibited internationally and on both the East and West Coasts of the USA. This year alone he will have solo exhibitions in Los Angeles, Paris and London, Cloud Music will be his second solo show at the Mark Moore Gallery. Simon Willems lives and works in London.

The Mark Moore Gallery will produce a catalog to accompany Cloud Music.