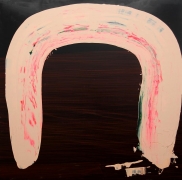 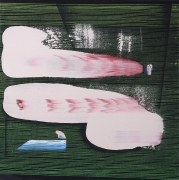 Mark Moore Gallery proudly presents "Smear," a solo exhibition of paintings by Los Angeles-based artist, Nano Rubio. Rubio is the recipient of the inaugural Moore Family Foundation Grant (MFF Grant) - awarded and juried by local curatorial entity, 5790projects - which includes a financial grant and Project Room show with Mark Moore Gallery. Engaging with seemingly discordant elements of structure and chaos, Rubio’s paintings are reminiscent of the “push/pull” spatial qualities associated with abstract expressionist painters, such as Hans Hofmann. By composing a background of highly precise line work behind a foreground of loosely gestured swaths of paint, Rubio engages in a rich interchange between geometric precision and performative mark-marking techniques.

Rubio’s meticulously rendered lines are derived from a traditional pinstriping technique, and recall the laborious methodology of hot rod detailing. Seemingly mechanical bands fill the canvas in waves, transforming the field into an undulating kind of optical ambiguity. By contrast, each foreground features the unpredictable quality of organic forms - some evoking the haunting presence of the human likeness while others merely allude to an indexical thumbprint. Rubio’s interest in a duplicitous surface is best exemplified by his manipulation of layering and distorting a single medium. While occupying a shared space and makeup, the paint's variance implies disconnected genres; an inequality that Rubio likens to sociopolitical polarities and limited consumer choice. The relationship between these dissonant practices creates a curious terrain in which macro structures rest upon surfaces of micro detailing; a tension that allows the viewer to magnify or diminish these elements at will. In Rubio's hands, paint is both the unifying and dividing constituent of an overall experience, and ultimately the cartography of his process-oriented execution. Whether it is achieved by filling a punching bag with paint, and letting the evidence of his exertion drag across the canvas, or painstakingly fashioning networks of painterly veins, Rubio's critique of societal disconnectivity is executed through his own physicality as much as his conceptual representation.

Nano Rubio (b.1983) received his MFA from Claremont Graduate University (CGU). He is the recipient of a Graduate Fellowship from CGU and a Joan Mitchell Foundation MFA Grant Nominee. Rubio has exhibited throughout Southern California at various venues such as R&R Gallery (Los Angeles), dA Center for Arts (Pomona), Todd Madigan Gallery (CSU Bakersfield), and most recently a solo exhibition at George Lawson Gallery (Los Angeles). The artist lives and works in Bakersfield, CA.