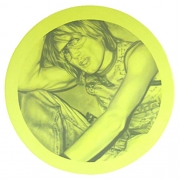 Mark Moore Gallery is pleased to introduce new works by Austrian artist, Klaus Wanker. Wanker's realist portraits pose and explore questions relating to youth culture, identity, mass media and the glut of images and celebrities that inundate contemporary society. He captures his young subjects intertwined with pop culture, presenting them as fantasies of themselves: cool, emotionless, beautiful and perfectly posed. His works present individuals that, ironically, find personal identity and location in mass media and advertising. The subject is reduced to an ideal paradigm of youth and beauty.

Wanker's work is ultimately a series of paradoxes and complexities; his subjects demand to be looked at and yet their faces betray nothing. He simultaneously critiques and mimics advertising; his works resemble advertisements formally yet they have none of the opulence. Although he seems to suggest there is a certain soulless-ness to his subjects, he is also apparently buying into the culture, replicating t-shirt slogans to transform his paintings into adverts themselves. He even seamlessly inscribes the title of the piece across the canvas, labeling the painting as an advertisement for itself, subtly branding it a commodity and ushering in a whole host of new complexities regarding the contemporary art market.

Born in Austria, Wanker studied at both the Academy of Fine Arts in Vienna and at the Kunstakademie in Dusseldorf, Germany. His work has been exhibited extensively across Europe and in the last year has been included in exhibitions on both the East and West Coast. This show will be his first solo exhibition in the United States. Klaus Wanker lives and works in Vienna, Austria.