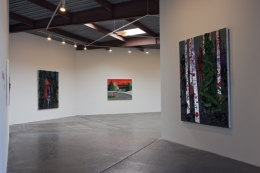 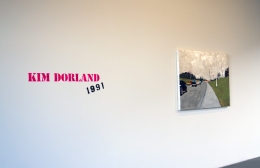 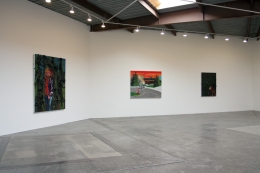 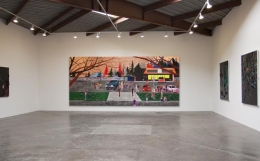 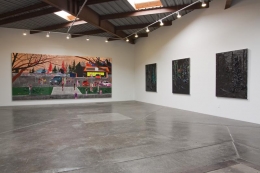 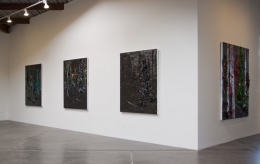 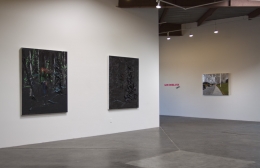 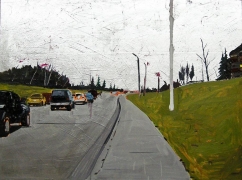 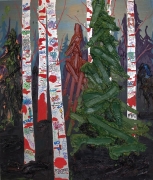 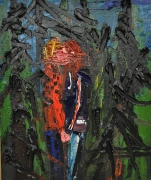 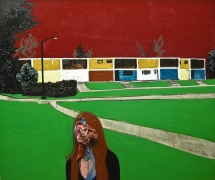 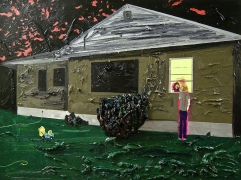 On the heels of his solo booth at PULSE Contemporary Art Fair (New York), Kim Dorland returns to LA with nearly a dozen studio-fresh paintings for his sophomore solo show with Mark Moore Gallery.

Nostalgia oftentimes evokes the most layered of emotions. Fondness and longing for bygone eras evolve as the effects of our maturation color our memories a different hue, creating an ever-morphing palette from which we create our autobiographies. Such is the mindset and aesthetic employed by Dorland as his densely tactile application of acrylic, oil, spray paint, marker, fur, nails, stickers, glass and metallic foils converge into generously textured depictions of reality and fantasy alike. Engaging with the common mythologies associated with the rural and the suburban, Dorland creates a frank and seamless relationship between the two. Stargazing teenagers, stumbled-upon wildlife and twilight skinny dipping elicit a similarly palpable sense of wonder and discovery through their visceral representations and bespeak encounters often discounted by youthful nonchalance and romanticism. The disparate nature of the mundane and the eccentric finds uncanny harmony through Dorland's distinctive hand and liberal cocktailing of mediums.

"Like his use of color, Mr. Dorland's paint handling often has a surprising delicacy and control. It offsets the mindless, overwrought machismo that this work both exudes and parodies."
- Roberta Smith, New York Times (2009)