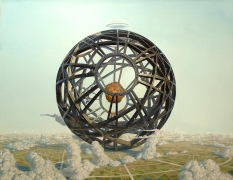 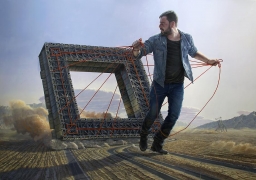 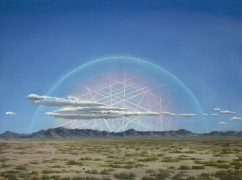 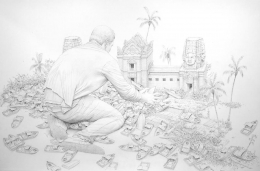 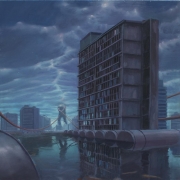 Mark Moore Gallery proudly presents "Terraformer," an inaugural exhibition of paintings by Brooklyn-based artist, Jean-Pierre Roy. Despite his photorealistic prowess, Roy's terrains are sourced from pure imagination – cinematic dystopias through a Dutch Golden Age lens. His Neo-Luminist panoramas engender an ominous tone, a sense of uniquely human ruination evident through melting icecaps, crumbling towers, and purging smokestacks. In this new body of work, Roy considers the beauty in catastrophe, as well as the repercussions of our fallible heedlessness.

Roy's obsessive meticulousness is analogous to the objective of modernized globalization – no canvas remains bare as no frontier remains untouched. His compositional horror vacui is increasingly less science fiction than it is foreshadow, as infinite industrial horizons appear as foreign as sketches of the New World were once perceived. Though his tableaus appear largely unpopulated, Roy uses dilapidated structures and techno-iconography to express a Physicalist paradigm of the world. Alongside the remnants of an imperialist gluttony too large to sustain, Roy introduces a solitary figure of epic proportions – an allegorical projection of the artist himself as a world-building "giant." Drawing upon an art historical lineage, Roy recontextualizes Goya's colossus as a cipher for the insatiable search for ultimate knowledge. His figures underline the sublime and terrifying aftermath of a sociopolitical cupidity. Although he critiques the myth of an all-saving hero, Roy alludes to hope through the drama of a distant rising sun or luminous structures – as though salvation waits at the dawn of a collective enlightenment.

Jean-Pierre Roy (born 1974, Santa Monica, CA) received his MFA from the New York Academy of Art (NY), and has since had solo exhibitions in New York, Seattle, and Chicago. His work has been exhibited at the Hyde Park Arts Center (IL), Virginia Museum of Contemporary Art (VA), the Neuberger Museum (NY), and the Torrance Art Museum (CA), among others. Roy's work has been acquired by several collections, including the Zabludowicz Collection, Pigozzi Collection, and Fischl Collection. This exhibition marks the gallery's first solo exhibition for Roy. The artist lives and works in Brooklyn, NY.