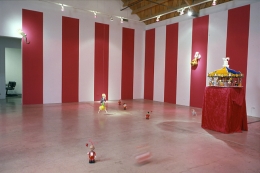 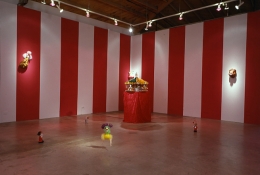 Concurrent with her one-person exhibition at the Museum of Contemporary Art, San Diego, Mark Moore Gallery is pleased to present its second exhibition of new work by UCI/Irvine graduate DEBORAH BROWN, from December 3, 1994 - January 7,1995.

Brown, who presently resides in St. Louis, will also have works on view at twelve (12) Barneys New York locations nationwide from mid-November through early January 1995 as part of that store’s holiday window displays, including the renown 17th Street, New York windows that have become a much-anticipated staple of the New York Christmas experience.

For her exhibition at Mark Moore, Brown will continue her investigation of the experience of self and self-image, as embodied in her humorous and often scathing “re-constructions” of childrens toys and dolls. The subjective nature of beauty, self-esteem, and the doll’s function as both a child’s (and adult’s) surrogate is seen as both fantasy and nightmare.

The centerpiece of the Mark Moore Gallery exhibition will be a three-foot diameter, operational carousel, to which Brown has re-configured all the figurative elements; the calliope music which is normally attendant to the carousel has been replaced with the mournful, heartfelt torch songs of passions sought and lost.