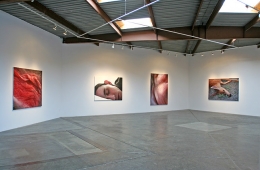 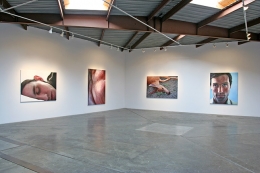 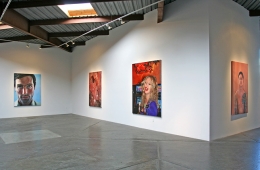 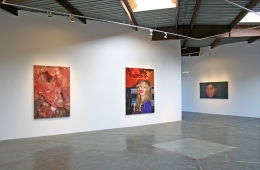 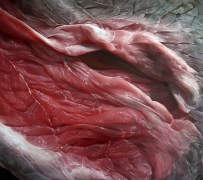 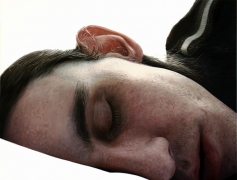 Cindy Wright paints large-scale portraits and still-life oil paintings that play at the intersection between figuration and abstraction. Wright focuses her gaze on regular visitors to her studio, creating formal portraits that echo the pictorial history of traditional British painting, while also nodding to painters such as Chuck Close and Thomas Ruff. Wright’s portraits are intermixed with canvases in which fresh meat turns the paint into rather abstract and unfathomable paintings.

Wright comments on her work “Often, my images have to do with a visual strength that I recognize, coupled to a content that, we hope, conveys to us some information about our environment. There is further a constant interchange between real images of the street and a projection of elements from the visual culture … It is a reflection or absorption, a reaction, a probing and a study of one’s surroundings.”

In 2005 she was selected for the Young Belgian Painting Prize at the Palais des Beaux Arts, Brussels and was included in the exhibition Slow Art at the Düsseldorf Museum Kunst Palast alongside such notables as Rineke Dijkstra and Luc Tuymans. Included in the prestigious British Petroleum BP Portrait Award in 2003 at the National Portrait Gallery, London, Wright has also won prizes at both the Royal Academy for Fine Arts, Antwerpen (2004) and the 10th International Hoppeland Painting Prize (2003).