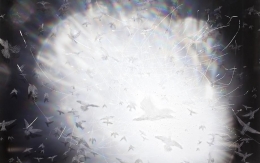 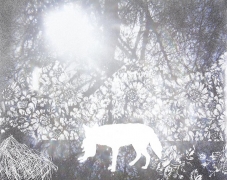 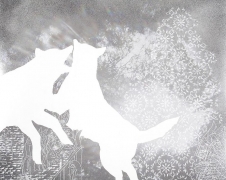 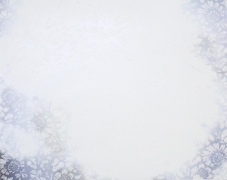 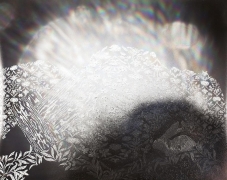 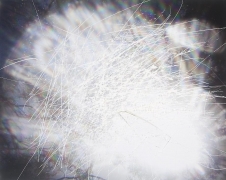 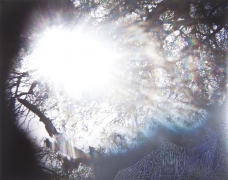 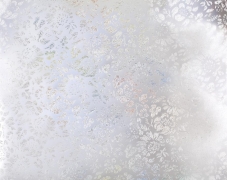 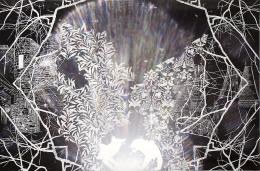 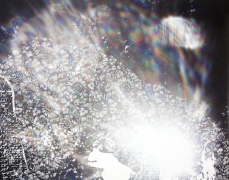 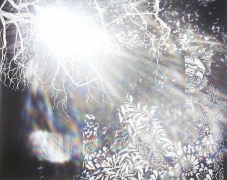 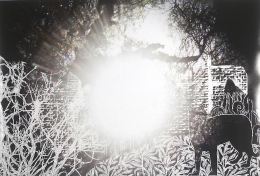 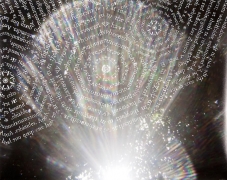 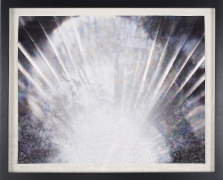 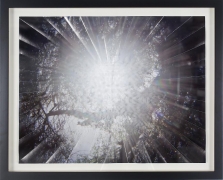 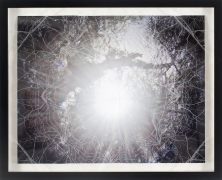 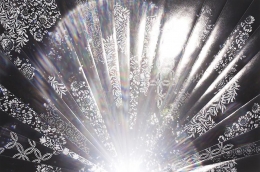 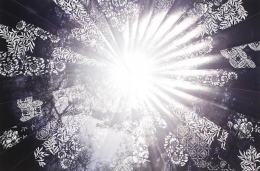 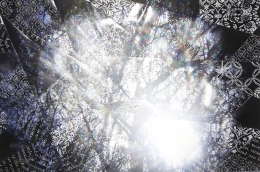 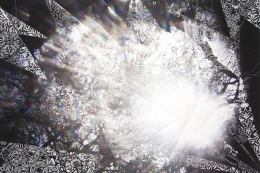 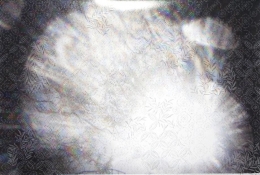 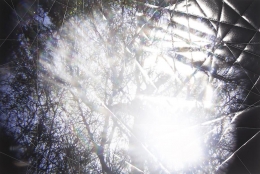 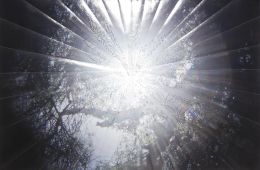 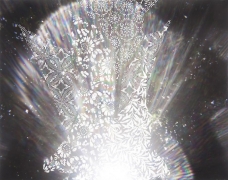 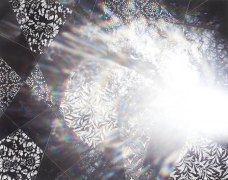 Mark Moore Gallery proudly presents GRFALWKV, a solo exhibition of altered photographs and a handcrafted book by gallery artist Christopher Russell. The central focus of Russell's show is a large-scale cloth-bound manuscript under the same title. Broken into five distinct chapters, the volume investigates the general territory of "endings" as the author explores various types of calamity pulled from art theory, history, and pop culture. These ideas inform the accompanying scratched-photo-drawings, which capture the psychological, otherworldly implications of being.

Countering the idea of the mass-produced novel and pervasive e-book, GRFALWKV harkens back to the handmade origins of bookmaking, imitating the illustrative qualities of crafted manuscripts while also recalling the visual language of contemporary materiality, literature, and design. Employing techniques of spray painting, collage, and fountain pen drawing, each page is meticulously transcribed by hand. Through this methodical process, Russell invites us to ruminate on the affects of mortality. The first chapter recalls scenes from Antichrist movies of the Cold War era, with illustrations alluding to environmental catastrophe. The next chapter delves into Edmund Burke's essay on terror as the ruling principal of the sublime, while the following chapter offers an imaginary glimpse into the aftermath of a nuclear blast. The fourth chapter “Dead Art Star” - deals with the art world as a catastrophic event in which ideals are traded and sold to the detriment of the artist's sense of self. The final chapter brings the text back to photographic seeing by offering brief descriptions of mundane scenes, and creates mental images that act as stages for potential traumas. Supplementary to the book are Russell's photographs of lens flares, rife with intricately scraped patterns and figures upon their surfaces. With a razorblade, Russell gouges stylized explosions and fragmented scenes of an apocalyptic aftermath into his images, creating a world in which animals have returned to re-inhabit the rubble left by these detonations. Simultaneously referencing death and rebirth, Russell's visual and written narrative guides us through the captivating, volatile nature of transience.

Russell (b. 1974) received his M.F.A. from the Art Center College of Design (CA). In 2009, he produced a solo exhibition as part of the Hammer Museum's (CA) "Hammer Projects" series. He has also been featured in group exhibitions at the Tokyo Institute of Photography (Japan), The Norton Museum (FL), Armory Center for the Arts (CA), White Columns (NY) De Appel Arts Center (Netherlands) Oakland Museum (CA), Los Angeles County Museum of Art (CA), among others. He has published numerous critical articles in Artillery Magazine, Art US, and Leisure, in addition to being a featured subject of positive review by the Los Angeles Times, New York Times, Huffington Post, Artillery, Frieze, and ArtForum, among others. Russell also produces his own unique books in addition to his 'zine Bedwetter. His first novel is Sniper, and other books include Budget Decadence (2nd Cannons Publications), Pattern Book (Insert Blanc Press) and Landscape (Kolapsomal Press). His work is included in the collections of Deutsche Bank, Brooklyn Museum, Museum of Contemporary Art, Chicago, Museum of Contemporary Art, Los Angeles, Rhode Island School of Design Museum, Hammer Museum, Museum of Fine Arts, Houston, and the Tokyo Metropolitan Museum of Photography, to name a few. In Spring 2014, Russell will release two print editions with Aperture at Paris PhotoLA.