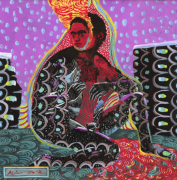 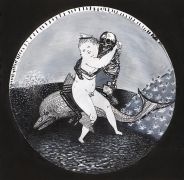 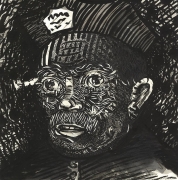 Mark Moore Gallery is pleased to announce an inaugural solo show of new works by painter Christopher Davison in the Project Room; an exhibition that will also act as Davison's first one-person exhibition in Los Angeles. Featuring a selection of Davison's trademark small paintings, "Jackanapes" will also debut several large-scale works; a significant departure for the artist.

Mining the subconscious for evocative imagery, Davison meanders through garish dreamscapes rife with fantasy, phantasmagoria and myth. He seamlessly entwines delicate ink lines with pools of dense gouache to create compositions versed in both printmaking and painting; a hazy ambiguity also articulated through his sundry figuration. With a single work's infrastructure encompassing as many as twenty-five other original compositions, Davison's creations are as layered as the stratums of his source material. Fragments of primitivism, realism and absurdism are wed in a visual stream of consciousness that spans the graphic surrealism of Odilon Redon and the playful non-sequiturs of Max Ernst. In exploring the sublime depths of the latent mind, Davison demonstrates a contemporary mastery of synesthesia that grapples with intrinsic desire, terror, hope and lust in its most primal forms - a Rimbaudian narrative that celebrates the nonsensical allure of human psychology and mortality.

Davison received his MFA in printmaking from the Tyler School of Art (PA). He has been included in exhibitions in New York, Miami, Copenhagen, Philadelphia, Boston, Rome, Los Angeles and Brussels. His work can be seen in the public collections of the Rose Art Museum (MA), University of Alabama (AL), Museum of the Hague (Netherlands), and the Frederick R. Weisman Foundation Collection (CA). He lives and works in Philadelphia (PA).