Later Comes Sooner Than You Think, 2007
oil and acrylic on canvas
93 x 65 inches 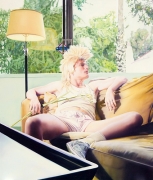 Mark Moore Gallery is pleased to announce new paintings and drawings from acclaimed young artist Christoph Schmidberger. Schmidberger’s brand of hyperrealism depicts a reality that is far more lurid and intense than the world we inhabit ever could be, a world rendered sinister through its very perfection. His subjects are often displayed in a state of undress, simultaneously exposed and flaunting themselves; as spectators we are never quite sure if we are witnessing something we should not. These youthful bodies often stare out at us as they lounge in the canvas, their coy, languid gaze at once inviting and abject, both alluring and disconcerting. At times the disquieting element is blatantly depicted in the scene, but more often than not, it emerges as a feeling, an instinct, as if Schmidberger has caught the moment just before any imperfection is revealed. The effect almost causes the viewer /voyeur to avert their eyes; as if they might see something they don’t want to, forever ruining the illusion of Schmidberger’s irresistible and seductive world.

"Everyday occurrences are rendered significant through the isolation, the clarity and that certain coldness that define one’s view of them. It is no longer the object […] that determines its significance, but rather the view of it."

Christoph Schmidberger attended the Higher Technical College of Graphic Arts from 1989 – 1994 in Graz, in his native Austria. He then went on to receive his BFA and MFA from the Academy of Fine Arts, Vienna. He has exhibited his work extensively throughout the United States and Europe, in both solo and group exhibitions. His paintings are included in numerous prestigious collections, such as LACMA, the Museum of Fine Art in Boston, the Museum of Contemporary Art San Diego, and the Saatchi Collection (London). Schmidberger lives and works in Los Angeles.

For more information on this artist or the opening event, please contact the gallery at 310.453.3031 or info@markmooregallery.