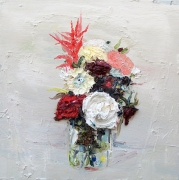 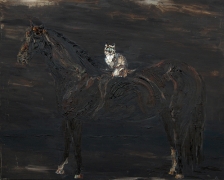 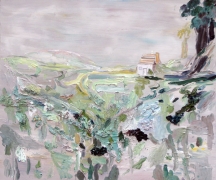 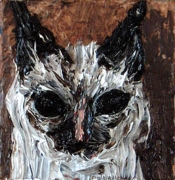 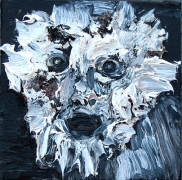 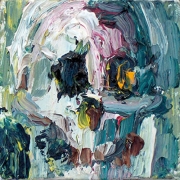 Mark Moore Gallery is pleased to announce new paintings from Los Angeles based artist Allison Schulnik. Regarding herself as a choreographer, Schulnik turns to her imagination in order to find the characters she casts within her canvases. Whether they appear as animals, strange creatures or alien forms, these characters are often based on a human framework, instilling within them a humanity they retain regardless of feathers or fur or blemishes. Schulnik often focuses on the eyes of her subjects, using their gaze not only to unsettle the viewer but also to prompt a sense of understanding and compassion that she hopes will provoke a certain viewer introspection. Schulnik creates her distinctive style by using old, worn brushes and thick globs of paint, the resulting canvases depicting a controlled chaos- often on an epic scale- in which her characters may reside.

"I allow my imagination to revel in its own world -- where thickly-sculpted oils, historical fact and blatant fiction collide to form images of tragedy, farce, and raw beauty."

Schulnik received her BFA in Experimental Animation at the California Institute of Arts in 2000. Her paintings have been exhibited internationally at venues including Mark Moore Gallery, Los Angeles, Black Dragon Society, Los Angeles, Bellwether Gallery, New York, Groeflin Maag Galerie, Basel, The Armory Show, New York, Rokeby Gallery, London, the Dallas Museum of Art, the Santa Monica Museum of Art and the Museum of Contemporary Art, Chicago. She will have her London debut solo exhibition at Rokeby Gallery in June 2007. Schulnik is represented by Mark Moore Gallery.

For more information on this artist or the opening event, please contact the gallery at 310.453.3031

Allison Schulnik
Back To Top